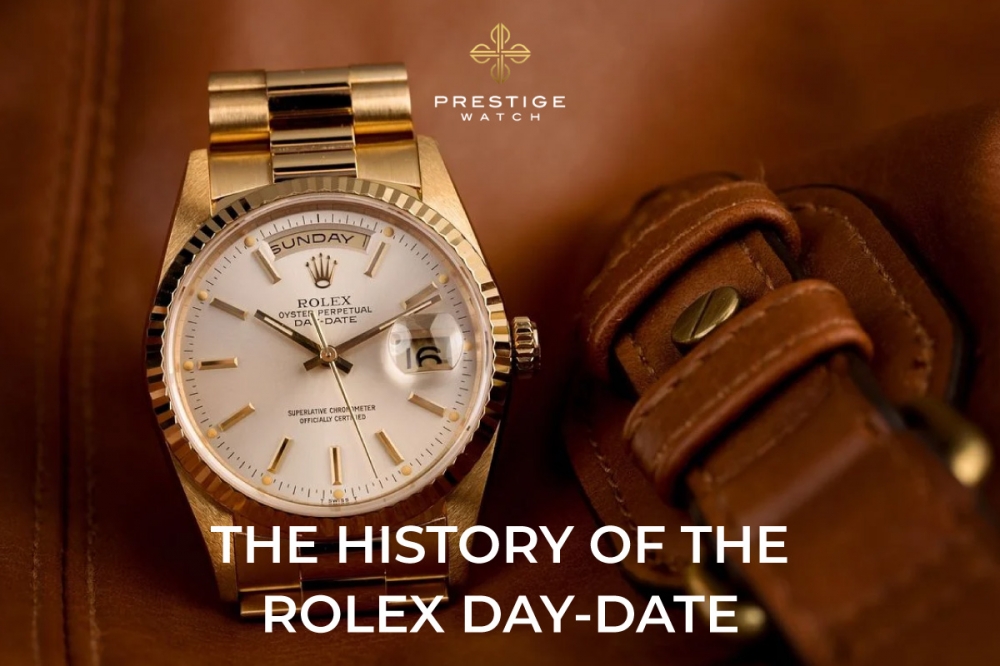 Rolex Day-Date's full name is Oyster Perpetual Day-Date. In 1956, the first Rolex Day-Date was created and lasted just over a year.  The 6510 and 6511 were the first references produced in the series. The Rolex 6511 model, first known as the “Rolex Day Date”, had a day window showing the full day of the week at the 12 o'clock window as well as the date of the day shown at the 3 o'clock window. These references were the first watches in the world to indicate both the date of the month and the day of the week, spelled out in full through windows in the dial.

Evolution of the Rolex Day-Date

In early stages, Rolex had only produced the day wheel in 11 different languages, but given the planetary success of this milestone, users are now able to switch from as many as 26 languages, including: English, Spanish, Arabic, German, Chinese, Danish, Basque, Catalan, Ethiopian, Finnish, French, Greek, Hebrew, Dutch, Indonesian, Italian, Japanese, Latin, Moroccan, Norwegian, Farsi, Polish, Portuguese, Russian, Swedish and Turkish.

As a member of the Oyster Perpetual series, the Rolex 6510 and 6511 models are also equipped with its patented waterproof Oyster case and self-winding perpetual movement. However, due to the complexity of the watch and its automatic movement, additional discs and a screw-down back were added, which increased the thickness of the caseback and resulted in a slightly domed appearance. Although the early Day-Date was waterproof up to 165 feet, this led to a rather bulky appearance. Yet, in Rolex’s never ending strive for perfection and modernization, designers later changed the look to a much more slender shape which we enjoy today. The Day Date was available in white gold, yellow gold, rose gold and platinum.

After just one year, these references are replaced by the new Day-Date ref. 6611 (fluted bezel), 6612 (smooth bezel) and 6613 (diamond-set bezel). Rolex’s 6611 models that were waterproof up to 100 feet soon replaced the Day Date, but it was still externally identical to the 6611. The 6611 featured the new calibre 1055 movement with its free sprung Micro-Stella balance, the first to be labelled "Superlative Chronometer Officially Certified" on the dial, and had a new accuracy standard guaranteed.

The most important difference from previous models is in movement: the microstar adjustment of the balance wheel allowed it to earn the COSC certification. A very limited number of specimens of 6611 have a different bridge plate, 0.1mm thicker. These specimens can be recognised thanks to the specific reference 6611B and, for their extreme rarity, are highly sought after by collectors.

Why is the Rolex Day-Date called ‘the president’s watch’ ?

“You know their names as you know your own. You know their faces from a thousand newspaper and magazine articles. You have seen them … ” Early Rolex advertisements for the model Day-Date often invited men who dressed impressively. The ads are referring to the type of men who wore the model. Apparently, Rolex was happily unabashed about the intended audience for this timepiece.

Thanks to its adoption as the wrist-swag by several U.S. presidents since it was officially launched in 1956, the Rolex Day-Date was eventually titled as “the president’s watch”. It is also unsurprising that Rolex has never been afraid to promote its association with influential figures.

The 36th president of the United States, Lyndon B. Johnson (LBJ) was undoubtedly the first world leader to contribute to its reputation as the watch of presidents and world leaders, even though he was not the first president to own a Day-Date.

President Johnson was quite a watch enthusiast. He famously wore a Vulcain Cricket, writing to the company’s president that he felt “less dressed without it.” However, he is most closely associated with his Rolex Day-Date, a watch he wore often during his presidency. He was also known for giving away Rolex watches as gifts. Late in his life, after dealing with near constant health problems for several decades, President Johnson gifted an 18k gold Rolex to his cardiologist.

Interestingly enough, President Dwight D. Eisenhower, who is most closely associated with the Rolex Day-Date, never actually owned one.

The Rolex model 18238 was introduced as the “Double Quick-Set” watch towards the end of 1990. This model made the setting of the Day and Date even easier as they could both be set independently from each other and the time. Rolex also expanded their Crown Collection to include all types of precious stones, although they were available with diamonds on the bezel at their debut. At the end of 2000, Rolex reintroduced the Day-Date in rose gold and also with a domed sapphire mineral glass.

END_OF_DOCUMENT_TOKEN_TO_BE_REPLACED

The pre-owned watch market is booming. While the primary market is expected to grow 1% per year, the growth rate in the ...