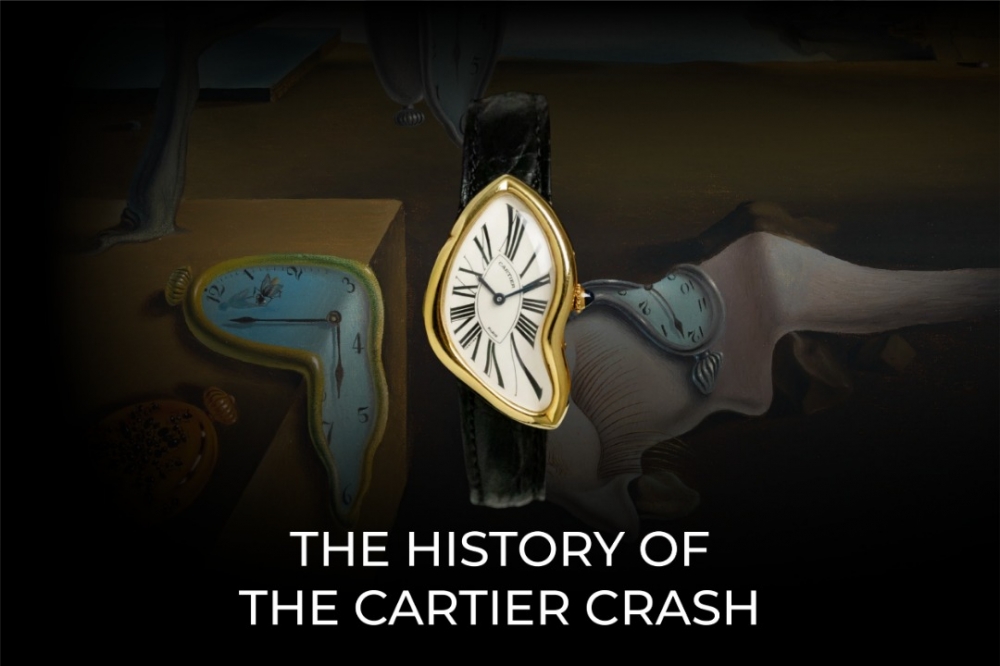 A timepiece that screams ingenuity that sells for more than 6 figures in auctions. Worn by celebrities and artists, an iconic timepiece that benefited because of its unique design. No watch is designed quite like the Cartier Crash. Its origins may be traced back to the Swinging Sixties when the watch was created in Cartier's first Bond Street flagship store in London. This watch is a perfect example of its decade.

The Cartier Crash's striking design is credited to Jean-Jacques Cartier and Rupert Emmerson's collaboration. At the time, Rupert Emmerson was a well-known craftsman, and Jean-Jacques was the great-grandson of Louis-François Cartier. Another theory however suggests that the Cartier Crash was inspired by Salvador Dali’s “The Persistence of Memory”, which Dali painted in 1931.

As for the true origins of its inspired design, we do not know for sure, but we do know the risks it took to design such a timepiece in the way it is. A reception that has been well noticed even in today’s day and age with artists and celebrities like Kanye West, Tyler the Creator, and Jay Z were seen wearing the Cartier Crash.

Back in the 1960s, there were numerous reasons why it was a chaotic era. The Beatles and other cultural icons had a significant influence that carried over into fashion and design. The Cartier Crash was first released in 1967 and originally featured a Jaeger-LeCoultre movement signed by Cartier.

Due to the unusual production challenges posed by the watch's case design, it was only occasionally produced throughout the 1960s, 1980s, and 1990s. It is also the cause of the cost. The Cartier Crash Skeleton was also created in a limited number throughout time. Rupert Emmerson claims that Jean-Jacques first disapproved of the Cartier Crash but later changed his mind after seeing how buyers reacted.

When the mid-90s came around, the Cartier Crash was no more. Not long after the Cartier Crash Skeleton was released during the early 2010s, powered by the manual winding 35-jewel and a 72-hour power reserve Cartier caliber 9618 MC. In 2019, the Cartier Crash ref. WGCH0006 was introduced for their London boutique as a regular, non-skeleton version of the watch similar to the ones from the 1980s and 1990s.

Only 15 of this particular Cartier caliber 8971MC with the manual winding movement were produced. If not for the original from the late 1960s, the rarest Cartier Crash is now available. In the end, a highly unique watch that was designed from the start to be rare and not as a marketing ploy but rather because of the work that went into producing them.

END_OF_DOCUMENT_TOKEN_TO_BE_REPLACED

With the nostalgic connection or historic provenance of a vintage Rolex watch and the class or contemporary style of a ...